Editor’s note: The ICO is currently seeking a new Executive Director, after the untimely passing of the organization’s previous leader, Roberio Silva. The names and details of endorsed candidates must be received by February 23, 2017. Learn more. 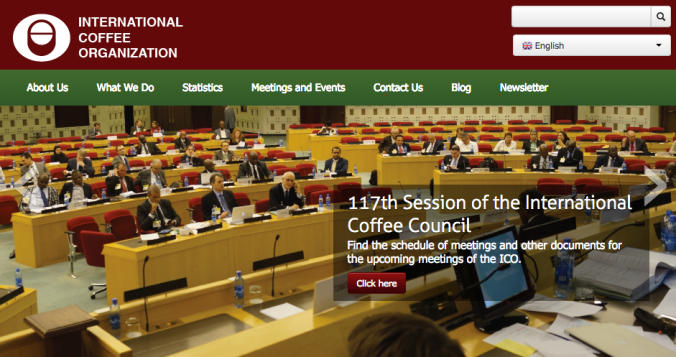 Last week, the International Coffee Organization (or ICO) held one of its semi-annual meetings in London. Delegates gathered from around the world to discuss coffee-related issues, plan the future of the ICO itself, and explore collaboration. The ICO serves as a useful forum for the coffee sector – with input from the NCA – for collaboration.

What is the ICO?

The ICO is a non-governmental organization that represents 77 member countries, serving as a forum to promote and support the coffee sector. It was originally founded in 1963, to administer the first “International Coffee Agreement,” which set quotas to withhold coffee from the market in order to keep prices stable.

Despite the original (and subsequent) agreements, coffee prices rose and fell due to external factors such as weather conditions. Questions about such agreements eventually arose, including whether or not the quota system was being effectively enforced. As a result, ICO “Coffee Agreements” were renegotiated and amended, over time expanding in scope to encompass tasks such as promoting the sector, promoting consumption, and the gathering of industry statistics. The ICO’s celebration of International Coffee Day on October 1 (not to be confused with the long U.S. tradition of celebrating National Coffee Day on September 29) is one example of such efforts.

The ICO operates from offices in London, England, under the auspices of the International Coffee Agreement 2007. Under this agreement, the ICO’s role is no longer to manipulate the economics of coffee markets, but to strengthen the global coffee sector and promote its sustainable expansion in a market-based environment to the benefit of all participants – especially small-scale farmers in coffee producing countries.

Trade associations and non-governmental organizations around the world are in transition. The same changes affecting for-profit companies – new technologies, greater input from customers, shifting agendas – affect the non-profit world. In the world of coffee, SCAA is merging with SCAE, NCA is evolving its services and mission, and the ICO too is taking stock of its strategic direction. It has plans to move to more cost-efficient headquarters, is conducting a strategic review, and is reassessing key operations, such as the gathering and dissemination of industry statistics.

In addition to lengthy discussions about ICO administrative matters, ICO members heard presentations last week on a number of crucial topics, such as:

Finance. The ICO held a forum on finance – asking the question “Is the current market structure creating value for all” in the face of decreased farm yields and profitability, climate change, food safety, and social and environmental concerns.

Many producing countries expressed concern over low prices and low returns to farmers. At the same time, it became clear that there’s no “one-size-fits-all” description of industry challenges – or solutions, which vary country to country, and producer to producer.

Statistics. The ICO produces a wide array of statistics, and presented current reports to ICO members during last week’s sessions. ICO is exploring what might be done to strengthen its data collection and reporting.

Market Efficiency. Federica Saliola, Program Manager, Special Initiatives Unit, the World Bank, offered an early look at a project to benchmark the efficiency of export markets. To put it more simply, by comparing time-to-export, costs of processing exports, and procedural hurdles, there may be an opportunity to identify efficiencies which could result in savings – including potentially more exports, or more income passing through the supply chain.

U.S. Market Trends. The NCA presented to the group on consumer trends in the U.S. market, drawing upon data from our National Coffee Drinking Trends study.

Other presentations included market overviews for Vietnam and El Salvador, efforts to promote coffee consumption in certain Central American and Caribbean countries, and a recap of the recent decision by the World Health Organization declaring that coffee is not classified as carcinogenic.

Earlier this year, the NCA estimated that the U.S. coffee industry accounted for over $225 billion in economic activity in the U.S. – activity which is deeply interconnected to the world around us. The ICO serves as an important platform to connect with policymakers, thought leaders, government officials, and NGOs in the sector, and even as it evolves, provides an opportunity for NCA to work with important counterparts from around the world.

In the meantime, we welcome your thoughts on the future of the ICO, and how it might continue evolving to serve coffee.