Coffee drinkers fall into one of three major groups based on their caffeine sensitivity, according to physician and author Dr J.W. Langer, in a new report authored for the Institute for Scientific Information on Coffee (ISIC).

The report, “Genetics, Metabolism and Individual Responses to Caffeine,” draws on existing research to explain how the body metabolizes caffeine, why some people are more affected by caffeine than others, and how healthcare professionals can take this into account when advising patients.

An individual’s response to caffeine is likely determined by two main genetic factors:

Based on these genetic factors, Dr. Langer has proposed three descriptive levels of overall caffeine sensitivity:

Slow-metabolism in the liver and high binding in the central nervous system. Even small amounts of caffeine will cause a stimulating effect and higher doses may cause sleep problems, as seen in a minority of people.

The balance between caffeine inactivation in the liver and binding in the central nervous system means that the individual can typically drink 2-5 cups of coffee during the day without adverse reactions or sleep disturbances. Caffeine is normally not recommended in the evening, but individual differences prevail, as seen in most people.

Fast-metabolisers of caffeine. Higher intakes can be consumed, (although healthcare professionals should advise that they still stay within the EFSA guidelines of no more than five cups of coffee per day9). Coffee drinking before bedtime does not typically disturb sleep. 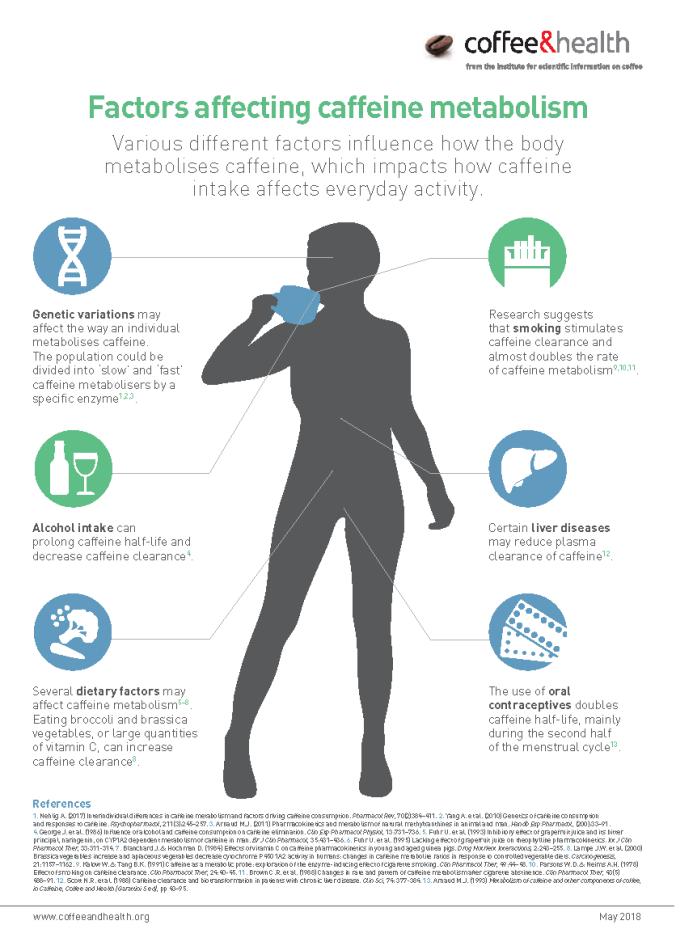 “It’s common for people to ask their doctor questions such as why they are kept awake by one cup of coffee, while their partner easily falls asleep after five cups. The answer is that we are all unique coffee drinkers. Our genetic make-up programmes our reaction to caffeine, just as it programmes our hair colour and eye colour.”

An individual with low sensitivity to caffeine probably will not experience the typically desired effects of caffeine, such as wakefulness, alertness, and increased concentration. It is important for healthcare professionals to stress that fast metabolisers should not exceed the recommended daily caffeine intake trying to achieve the desired effects.

Dr. Langer continued: “Most people will self-moderate their caffeine intake based on their personal experience of what they can tolerate. However it’s important that those with a low sensitivity to caffeine stay within the recommended daily caffeine intake of up to 400mg caffeine, which is equivalent to around five cups of coffee.”

Dr. J.W. Langer  is a physician, author, and media commentator. He is a clinical pharmacology lecturer at Copenhagen University’s Medical School and the author of several books on nutrition, blood pressure, exercise, healthy lifestyle, and self-care. He has over 25 years’ experience in translating hard science into everyday language and is frequently invited to provide his expert commentary on television, radio and in newspapers, discussing issues such as nutrition, exercise, health and wellness.